LONG POND, Pa. (Aug.1, 2016) – Trevor Bayne, driver of the No. 6 AdvoCare Ford Fusion, scored a 19th-place finish in the NASCAR Sprint Cup Series (NSCS) event at Pocono Raceway on Monday afternoon after heavy fog forced NASCAR to call the race complete after 138 of the 160 scheduled laps.

“We had a solid run going,” said Bayne after the race. “We were able to drive our way up to sixth there before getting shuffled out after restarting on the outside on what I think was our last restart. From there we just didn’t have the strategy fall our way with that caution coming out for the weather. I wish we could’ve run this thing to the end but we’ll get them next week at Watkins Glen with this AdvoCare Ford.”

Bayne took the green flag for the rain-postponed event from the 31st position but was able to utilize a Lap 19 restart following a competition caution to race into 22nd. The Roush Fenway Racing driver continued to battle for position inside the top 25 throughout the first green-flag run and got up to as high as 12th before hitting pit road under green on Lap 52.

Bayne cycled out to 21st following the pit stop and maintained his track position until a caution on Lap 85 gave crew chief Matt Puccia the opportunity to bring the AdvoCare Ford to pit road for four tires and a chassis adjustment. The Knoxville, Tenn. native returned to the track for the ensuing restart in the 23rd position but wasted little time working his way into the top 20 and up to 19th before the caution came out once again on Lap 98.

Crew chief Puccia decided to make a strategy call during this caution and left Bayne out on the race track while several of the race leaders came to pit road. The strategy call worked as Bayne took the Lap 103 restart from the ninth position. Bayne continued to move forward from there, making it three wide off of the first corner to improve to sixth before the caution came out once again on Lap 104.

Bayne took the Lap 109 restart from the sixth position but was shuffled back to 15th after getting forced three wide heading into the second corner. Despite the setback Bayne never gave up and continued to fight for position in the top 15 before another round of green flag pit stops began on Lap 125.

With fog closing in and weather in the distance Bayne returned to the track in 20th, racing with Roush Fenway teammate Ricky Stenhouse Jr. However, as the fog grew thicker the visibility began to worsen, NASCAR decided to throw the caution flag and ultimately the red flag in the hopes that the fog would clear up and the race can resume.

Unfortunately, the fog grew thicker and forced NASCAR to call the race official on Lap 138 of the originally scheduled 160 laps. Bayne was scored with a 19th-place finish.

With the result, Bayne now trails the 16th and final position in the Chase for the NASCAR Sprint Cup championship grid by 28 points.

Next up for the NSCS is Watkins Glen International on Sunday, Aug. 7. 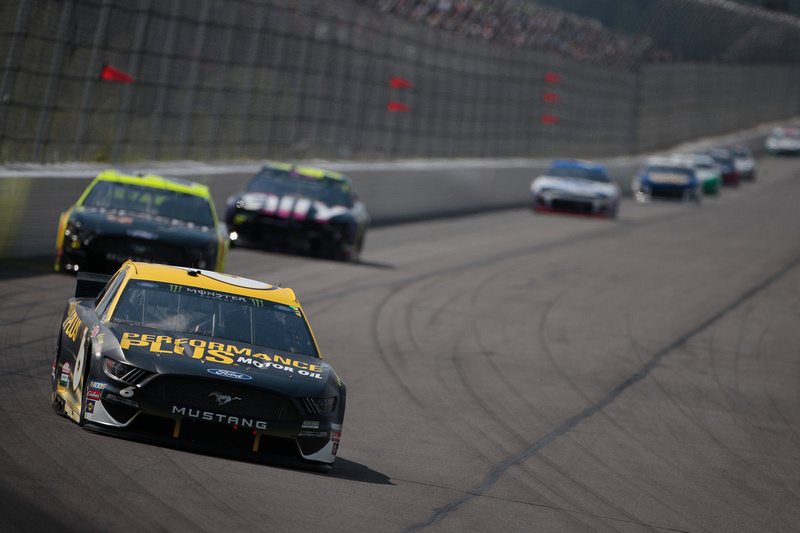