Elliott Sadler makes his 12th NASCAR XFINITY Series (NXS) start at Chicagoland Speedway this weekend in Joliet, IL. In Sadler’s previous 11 starts, he has one win in 2012, two top-five and six top-10 finishes at Chicagoland.

Sadler finished in fifth-place during Saturday’s NXS race at Michigan International Speedway. Sadler qualified for the 125-lap event on Saturday morning and started the NXS race from the 16th position. Running well, Sadler entered pit road 11th during the scheduled competition caution on Lap 26. Sadler had a fast pit stop, but was penalized for too many men over the wall. The penalty occurred when a crew member fell over the wall as he tried to grab a rolling tire. Sadler was penalized and had to go to the back of the field. Sadler pushed through the adversity and methodically worked his way forward with quality pit stops and disciplined passing. Sadler was able to hold his ground on the final restarts and managed to drive his No. 1 OneMain Financial Ford Mustang across the finish line in the fifth position.

Following the NXS race at Michigan, Sadler holds his position in sixth-place in the NXS Driver Point Standings. After 13 races, Sadler is 75 points behind the leader, but now is only 14 points behind fifth-place.

TV coverage for Saturday’s NXS race will be on FOX Sports 1 at 9:30PM ET.

Sadler’s No. 1 OneMain Financial Ford Mustang will be in the following Illinois cities this week; Oswego, North Aurora, Springfield and New Berlin. For exact locations and times, visit www.OneMainRacing.com.

“Chicagoland Speedway is one of my favorite race tracks that we visit on the NASCAR XFINITY Series schedule. I celebrated in Victory Lane in 2012 and I’ve been fortunate enough to bring home a handful of top-10’s and top-five finishes from Chicagoland. The timing couldn’t be any better for our No. 1 OneMain Financial Ford Mustang team. Things are really starting to click within our group and it’s shown over the past five races with four top-10’s and last week’s top-five finish at Michigan. Hopefully, we can keep the momentum rolling this Saturday night and bring home another strong finish for Roush Fenway Racing. 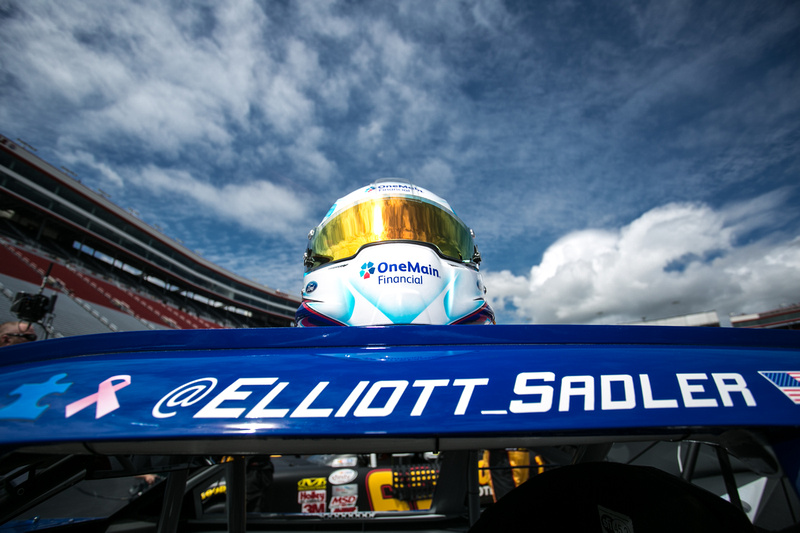